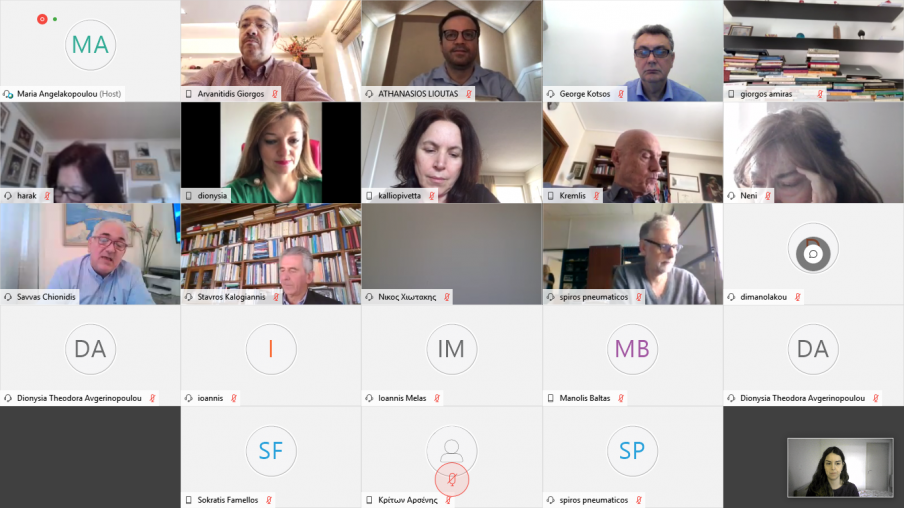 During the coronavirus crisis, the Hellenic Parliament in Greece is faced, like most parliaments in the world, with the challenge of continuing to function effectively, while protecting the health of members and staff. In this first of a series of short articles, INTER PARES is highlighting innovative practices that European Union Member State Parliaments, and our partner parliaments around the world, are adopting to enable parliaments to carry out their mandates of legislation, oversight, and representation, at this crucial time.

Dr. Dionysia-Theodora Avgerinopoulou chairs the Special Permanent Committee of Environmental  Protection, whose mandate includes providing oversight on government environmental actions, and leading policy discussion on environmental challenges and solutions. Unlike Standing Committees, the eight Special Permanent Committees don’t have a formal legislative role, which allows them to operate more flexibly than Standing Committees, without the obligation to meet at specific intervals to address legislative proposals.

At the onset of the pandemic, the Speaker of the Hellenic Parliament agreed that the Special Permanent Committees would not have to meet during the crisis. However, Dr. Avgerinopoulou and her committee felt that the interconnection between coronavirus and environmental questions specifically needed attention during the crisis, and the work of the committee could help to improve policy outcomes.

As a result, Dr. Avgerinopoulou and her fellow committee members decided to take the initiative and organize a meeting of the committee, specifically to talk about the relationship between covid-19 and the environment. Although the Hellenic parliament has a specific provision in its rules of procedure that allow formal committee meetings to be held virtually, she decided it would be most effective to organize an informal meeting that could be held quickly. The Speaker was formally advised of the meeting, and it was advertised with a press release issued by the parliament

The committee meeting took place on April 8, using the Webex videoconferencing technology. The turnout was exceptional; 28 of the 30 members attended, with one absent due to illness and the other due to front-line work as a medic combatting the pandemic.

Two issues were addressed in particular; the relationship between covid-19 and atmospheric pollution, and waste resulting from covid-19 treatment and prevention measures. Government, academic and pharmaceutical and recycling industry experts were invited to talk about these issues, and were questioned by committee members about the situation in their respective expertise areas.

The committee discussed how policy could be adapted to take into account the finding that covid-19 outcomes are worse in highly polluted areas; the committee recommended to government that further research be carried out on the link between pollution and disease outcomes. Among other measures, the committee proposes that the public be made aware of the negative impact of atmospheric pollution on disease outcome, and recommends as an interim measure that those particularly at risk should avoid highly polluted areas.

The committee explored with experts the issue of medical and protective waste resulting from covid-19 treatment and prevention. It recommended that protocols should be established treating covid-19 related waste as hazardous, and establishing specific processes for collecting and disposing of it in hospitals, municipalities, nursing homes, and pharmacies.

Overall, the committee felt that Greece had taken the right steps to combat the pandemic. However, the committee noted that, “international organizations and the EU have been unprepared to deal with a truly unprecedented health outbreak that has led to a pandemic and, in the midterm, it is necessary to explore how to better prepare and possibly activate the public health policy, as defined in Article 168 of the Treaty on the Functioning of the European Union (TFEU), and create a harmonized body of legal rules for pandemics”.

In an interview with INTER PARES on April 16, Dr. Avgerinopoulou noted that the meeting was actually more fluid than regular meetings held at the parliament. She felt that there were three reasons for this. The first was that as it was held virtually with everyone at their homes, people interacted more naturally than in the formal environment of a committee room. The second was that unlike regular committee meetings which are all broadcast directly to the public, the virtual meeting was on intranet; as a result, members didn’t feel the need to put on a show for viewers. Thirdly, Dr. Avgerinopoulou noticed that all members expressed a certain solidarity with each other and with the whole population facing this threat; covid-19 transcends political point-scoring.

Although the meeting wasn’t broadcast, the minutes of the meeting were produced and posted on the parliament website. The committee is planning its next virtual meeting in the week of April 20, which will continue to scrutinize the relationships between environmental protection and the covid-19 pandemic.